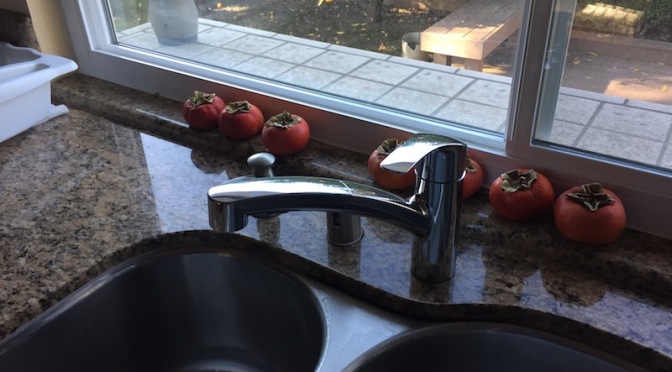 The Mundane Monday photo challenge has weekly themes this year, and this week’s theme is a “washbasin.” I put the term in quotes because we in the USA don’t usually call it that. The picture in the blog looks like a sink to me. Clearly this challenge is right for me, though, because I already have some sink pictures.

These were taken before and after we got our new faucet. The old faucet came with the house when we moved in. It was burnished stainless steel and matched the sink and appliances. It was also a pain in the neck. The button that allowed you to switch from a steady stream to a shower-like rinse had fallen off and gone down the garbage disposal. Then the whole faucet got loose and wobbly. I tried to fix it myself but wasn’t able to. Neither was our regular handyman, because something inside was irreparably broken. “Cheap plastic parts inside,” he said. “They don’t last.” So we bought the one on the right. It’s shinier and it feels more substantial than the old one. We’re hoping it will last a little longer.

I also think it is interesting that you can see the persimmons from our backyard tree that I had put on the counter to ripen. There are fewer in the “after” photo because I had used many of them to make persimmon cookies by that time. Now they are all gone: I pulped the remaining few and froze the pulp.