This book could be titled “Another Inconvenient Truth,” because it takes as a starting point what most polemical environmentalist literature does not: that we humans need fossil fuels, factories, manufacturing, and chemicals–even toxic ones. We also need corporations and jobs. The author accepts that these aspects of our lives are not going away, at least not in the absence of the environmental crash/catastrophe we are desperately trying to avoid. Once that foundation has been laid, the rest of the book can be built on it. The result is a largely even-handed discussion of what the built environment is made of, how it got that way, and a clear-eyed look at what steps might be taken to make the whole enterprise more sustainable, allowing humans to tread more lightly on the earth.

The author, Julia LF Goldstein, has a PhD in materials science and is a trained engineer and award-winning technical writer. This background molds her prose for better and worse. Her explanation of why and how the air has gotten cleaner since the 1970s is well-written, clear, and easy for the educated lay person to follow, as are her explanations of why and how it can be difficult to remove toxins from the environment. I hadn’t known the scope of the e-waste recycling problem until reading this book either, and I’m now giving myself two cheers for keeping my old cell phone a while longer.

This book also provides an interesting early-2019 snapshot of new companies and new technologies at work. Some of these new technologies are fascinating, and seem to be right out of science fiction. There is the sonic generator technology used by Ronin8, that uses underwater sound waves to sort materials by density. There is EcoSheep, a company selling a sheep oil lubricant that works better than petroleum-based competitors. And there is Mighty-O donuts, an almost zero-waste vegan donut shop. Reading about these companies gives me hope that entrepreneurship will indeed be a large part of the sustainability solution.

The writing is still quite technical, however, and is somewhat lacking in the areas of storytelling and reader engagement. To address this, Goldstein occasionally throws in an anecdote or two from her own experience. For example, she spends a few pages comparing the different kinds of tennis racquets she has owned, some made of carbon fiber. She also describes the milk she has purchased in glass bottles from a Seattle-area delivery service as delicious. Anecdotes like these can help to humanize her for the reader, as it did me, but they may backfire if the reader doesn’t share her biases or demographic. Millennials reading it might end up feeling lectured by their mother or teacher. People who can’t afford carbon fiber tennis racquets or milk delivery may feel condescended to. Environmental activists may be impatient with the incremental and halfway progress that these measures will bring about. And as someone who has studied molecular biology and genetic engineering, even I thought that her willingness to imply that the controversial agricultural weed killer Roundup is a public health menace on a par with Radium or Tobacco was unnecessarily hyperbolic. But that there is something there to annoy people on multiple sides of the political landscape probably only means that she has gotten the tone about right.

Goldstein makes extensive use of interviews of CEOs and founders of companies who are implementing green policies. This is an inspired idea, and these interviews are promising for reader engagement. But here too, more vivid language would be helpful. Instead of being written in a standard book or magazine interview format, with an introduction, questions from the author, and answers from the interviewee in his or her own voice interleaved, the interviews are summarized in their entirety in several paragraphs of the author’s workmanlike technical prose. I found this format confusing enough that I didn’t even realize that I was reading the first “interview” before I was halfway through it.

The exception is the interview with Smokey Peck, of Interwest Paper in Salt Lake City UT. His interview comes the closest to the type of interview I would expect to continue reading in a magazine. Although it is not written in his voice, the interview provides several stories of Smokey overcoming obstacles or making prescient decisions; for example he has been ahead of the curve on inventory control for years, and he convinced a resistant Utah state representative to support curbside recycling. Smokey also provides the author with some well-chosen quotes and his is the only name I remembered while writing this review without having to look it up.

The other interview subjects are similarly well-chosen to illustrate the author’s points; I only wish she had fleshed the subjects out a bit more and given them more of their own authentic voices. I believe this would help further humanize these business leaders and give a face to the corporations that remain anonymous and all-too-easy to scapegoat.

I will end this review by saying that I think every American adult should read this book, and that more authors should write even-handed, non-hyperbolic books like this one. Material Value is occasionally slow going, but overall it is a refreshing and practical antidote to the polarized sound bites that dominate so much of our political discourse about climate and sustainability.

View all my reviews on Goodreads

I’ve written about adventure cycling for the We are the World Blogfest before, when I wrote about my friend Jasmine Reese, who is cycling across the country and around the world with her dog and her violin.

This month I want to call attention to another adventure cyclist, local resident Tim Oye, who is riding for Climate Ride, a nonprofit that organizes events to raise awareness and support for “active transportation” and environmental causes. Tim’s ride will take him through Death Valley this coming week.  Tim will also be giving a presentation at my church on Saturday night.

Environmental advocate and Sunnyvale resident, Tim Oye, is biking across the US to talk with adults and kids about Oceans, Plastic, and Climate Change. While bicycling 4500 miles from San Francisco to Boston, he will stop to give a talk about bicycling across the continent, how day-to-day human activities affect our oceans, and what we all can do to save our environment for our kids. With a degree in Chemistry from Harvard and after more than 30 years in high tech doing product development at Apple, Sun, and Adobe, Tim switched careers to pursue environmental advocacy and public service. He is a certified bicycling instructor with the League of American Bicyclists, a coach instructor for the American Youth Soccer Organization, a 4-H leader, and on the cutting edge of going zero waste.

I worked on “Anything But a Car Day” at my son’s school last year. It is an initiative to promote kids biking to school safely. My son biked to middle school. Now, in high school, he lives close enough that he can walk. 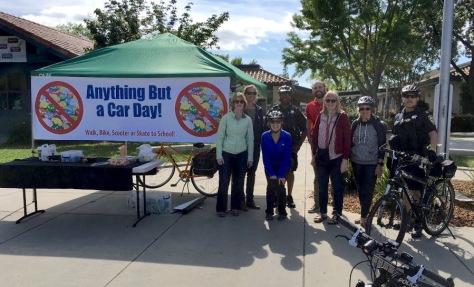 I like to bicycle and I used to ride my bike to work when I had a shorter commute, but I am not as hard-core as these adventure cyclists. We can’t all do everything but we all can do something!

The “We Are the World Blogfest” (#WATWB) shares positive news on social media. Cohosts for this month are: Inderpreet Uppal,  Shilpa Garg, Sylvia McGrath , Peter Nena, and Belinda WitzenHausen. Please check out their WATWB posts and say hello!

The last Friday of the month brings the February installment of the “We are the World Blogfest.” WATWB seeks to promote positive news. There are many an oasis of love and light out there, stories that show compassion and the resilience of the human spirit. Sharing these stories increases our awareness of hope in our increasingly dark world. For more information, visit:  http://www.damyantiwrites.com/we-are-the-world-blogfest/

END_OF_DOCUMENT_TOKEN_TO_BE_REPLACED

Strangers in Their Own Land: Anger and Mourning on the American Right by Arlie Russell Hochschild

I have to give the author credit for being one of the first avowed US liberals to delve deeply into the sociology of the American right. She began research for this book at least 6 years ago, long before lefties getting to know righties had become the cottage industry it is today. I’m a little late to this party, and I’m already tired of it. END_OF_DOCUMENT_TOKEN_TO_BE_REPLACED

Six Sisters is the sort of book that makes me glad I started blogging. I found out about it by reading the author’s blog, Green Life, Blue Water. This book does not fit neatly into a niche or a genre, but in my opinion that is a strength. It consists of three novellas, each about two sisters, put together into one book. The novellas are arranged in order of length, shortest to longest, and, I would argue, in order of success. Whether they were written in that order or not, I don’t know, but I felt like I was watching the author grow in authority and power as a writer as the stories progressed.