Since putting up my own Little Free Library a few months ago, I have made it a project to visit others, both local and out of town.

My library has a geocache, and this month I have gotten extra visitors looking for clues for the geocaching “Mystery at the Museum” puzzle. I also put a geocache in a local friend’s Library that she made out of an old newspaper box. Here’s the door to that one: 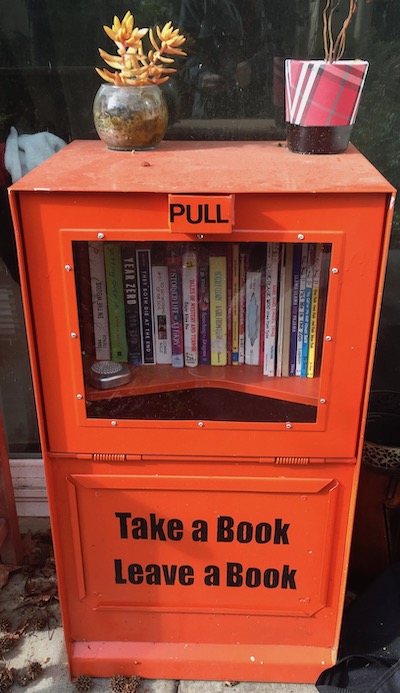 I started inline skating again recently. I originally learned to use inline skates in graduate school, the last time I lived in California, and I dug my old roller blades out of the garage with the intent of getting some exercise around the neighborhood and reliving old times. Those skates were unfortunately so old that the plastic cracked and the skates were unusable. Undaunted, I bought new ones and went out skating several days last week. While skating, I found another neighborhood LFL with nice blue doors. You can see my shadow taking the picture in the lower left corner. 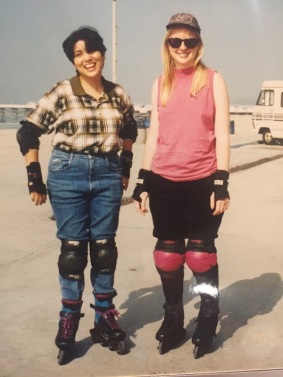 Rollerblading with a friend in grad school

Photographing the LFL on skates

Some LFLs are close to elementary schools and are well-stocked with kids’ books behind their doors (or not):

And some LFL Stewards really go all out, decorating not just their libraries but the areas around them. There are benches, chairs, solar panels, statues, flowers, signs, and paths around these libraries.

San Jose has some other great LFLs too:

This last one doesn’t have a door at all, but I’m adding it into this post anyway because I think it’s a cool idea. The Allentown/Bethlehem/Easton airport has its own book exchange too, where you can pick up a book for the upcoming flight, or leave one that you’ve finished reading.

Thursday Doors is a weekly feature allowing door lovers to come together to admire and share their favorite door photos from around the world. Feel free to join in on the fun by creating your own Thursday Doors post each week and then sharing your link in the comments at Norm’s blog.