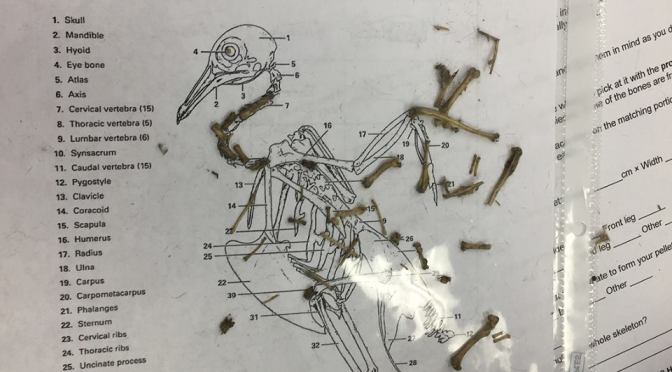 This week’s Mundane Monday theme is “bones.” For this theme, Dr. KO has a nice picture of an alligator snapping turtle skeleton, which you should definitely check out (also, raise your hand if you knew before this that there was a such thing as an “alligator snapping turtle.” My hand is not up). At first I was concerned I wouldn’t have anything for this week, and then I remembered. This is a great lead-in to the topic that’s been on my mind recently: Back to School!

I have not had much time for blogging lately because my teaching job has started up again. I teach middle-grade science with a non-profit organization called Science from Scientists. Regular school, including my kids’ high school and college, started already a while ago, but SciSci gives the teachers and students a week or two to get settled in before we start our visits. This year I have two completely new schools and two new co-Instructors to work with. I’m also going back to two schools I worked with last year and liked.

One of our most popular lessons at SciSci includes the dissection of an owl pellet. Most of my prior exposure to owls has been via children’s fiction, and I first learned about the pellets as an adult when I taught this lesson.

Owls don’t poop. They eat their prey whole and digest it in the gizzard, a second stomach. They absorb nutrients like we do from the soft parts of the prey, and eventually regurgitate a pellet containing the indigestible bits (mainly fur and/or feathers and bones). This is a YouTube video of the process that we show our students. It was taken in Ontario in 2014:

Will you ever look at Hedwig quite the same way again?

One of the many cool things about owl pellets is that you can dissect them and find out what the owl has eaten. If you buy the pellets from Carolina Biological Supply like we do, you usually find a mouse skeleton, maybe two, in the pellet. Occasionally you might find a bird. The prey animals can be identified by the skulls, and sometimes a large portion of the skeleton can be reconstructed.

These bones are quite small, but very interesting!