I’m getting ready to go on another trip, this time to Germany. Internet access will be spotty, and while I can technically blog from my phone, I find it cumbersome. I will be gone for a month and not sure how much blogging I will be able to do.

Since 1983 when I lived in Berlin, I’ve been to Germany many times, at this point more than I can accurately count. I traveled to Germany in graduate school and gave my thesis seminar at institutes in Tübingen and Frankfurt. I married a German a few years later, we went to Germany for our honeymoon, and we have been back every other year since then, for the last 21 years.

I find myself in an odd position in that although I’ve been there pretty often, Germany is not home for me. I am semi-fluent, enough to get around, but not a native speaker. We have been trying to get our kids to learn to speak German since they born, and frankly it is much harder than I was led to believe!

But, about the doors. The two photos above are different views of the gate into Memmingen, in Bavaria, where we were two years ago after dropping off our kids at German camp. Memmingen is an old town in the Swabia area of Southern Germany. Its origins date back to the Roman empire. I wasn’t doing Thursday doors back when I was there, so if I happened to catch a door in a photo, I was lucky. I’d say that gates count.

There are also some nice-looking old buildings and monuments in Memmingen that have weighty doors. But the doors are better in context: 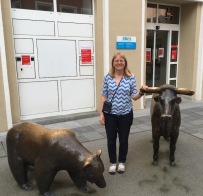 This last door is more personal. Here my husband is standing in front of the door to the house he grew up in. This house is not in Memmingen. It is much further north, in the Bundesland of Nordrhein-Westfalen, in the town of Mülheim an der Ruhr.

My husband’s mother passed away young, before I ever met him, and by the time I visited this house for the first time it was starting to fall into disrepair. Eventually his elderly father, who had remarried and was no longer living there, could not keep up with it, and it had to be sold. By that time it was barely livable, the yard had become overgrown with weeds and trees, and it required a complete overhaul. The new owners have done a great job with it. We saw the exterior had been painted and fixed up, the trees tamed, the living areas made bright with new windows and paint. The old house, shuttered and lonely for years, has new life now and echoes with the laughter of children.

Last year my trip to Asia supplied me with Thursday Doors posts for a lot of the rest of the year. I’m hoping that now that I know to look for the doors, this trip will do the same!

Thursday Doors is a weekly feature allowing door lovers to come together to admire and share their favorite door photos from around the world. Feel free to join in on the fun by creating your own Thursday Doors post each week and then sharing it, between Thursday morning and Saturday noon (North American eastern time) at Norm 2.0’s blog here.