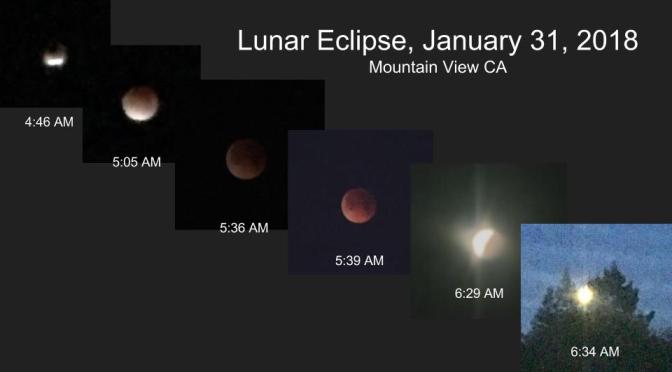 Live Webcasts! How to Watch the Super Blue Blood Moon Online from Space.com

The coverage is a little breathless, but I’m still glad I got up to see it.

Because the moon is close to the Earth in its orbit this month, and appears larger and brighter than usual.

Because it is the second full moon in the month of January. There actually won’t be one in February at all this year.

What’s the “blood” about?

When the Earth’s shadow passes between the sun and the moon, the moon no longer reflects the sun’s light, but it does reflect a bit of light from the Earth, which appears reddish. The red color has historically been called a “blood moon.”

And the eclipse? Didn’t we just have one of those last summer? (And I didn’t keep the glasses)

Yes, we had a total solar eclipse last summer, which I wrote about here and here. This month we had a total lunar eclipse. A solar eclipse happens when the moon comes between the Earth and the sun, covering the sun for a few minutes. A lunar eclipse happens when the Earth comes between the moon and the sun, and the Earth’s shadow covers the moon. Lunar eclipses last for several hours, and you don’t need glasses to see them. The downside is that you have to get up in the middle of the night.

I got up just before totality started, and I took some pictures with my iphone camera attached to binoculars. I also have a small telescope, but wasn’t able to attach the phone effectively there. I could see the moon very well through the west-facing glass sliding door that leads out onto our back deck. I opened and shut the door multiple times to keep from getting too cold and to keep the cat from escaping!

Individually the pictures are kind of small and grainy, but together they make a nice collage:

You see how the path of the Earth’s shadow travelled from the upper left to the lower right, how long totality lasted (in comparison to last year’s solar eclipse), and just how bright the reflected sunlight is, relative to the reddish light reflected from the Earth. I stopped watching as the moon set behind some trees and the sun rose.

For more information, viewing, and pictures, check out the article above, this National Geographic article, Rare ‘Super Blue Blood Moon’ Coming–First in 35 Years and these photos submitted to Newsweek from all over the world: Here are the Best Pictures of the Lunar Eclipse Super Moon.