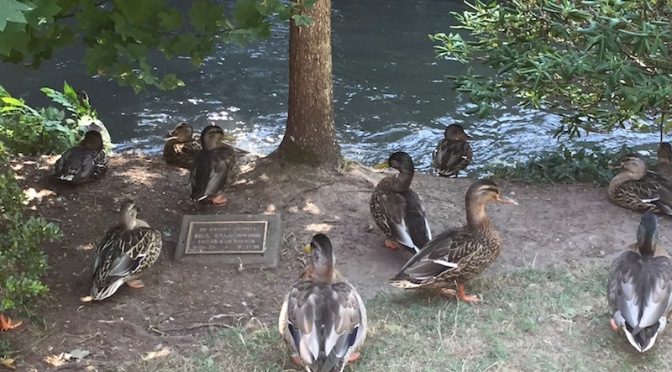 I am finally home from dropping my daughter off at Willamette University for her freshman year. It was a fun and eventful trip, but at the end came a long and kind of lonely drive, without a companion or anyone to share in the driving, the way my daughter did on the way up. When I got back late Sunday night I was tired and I spent most of Monday recovering, unpacking, doing laundry, and watching Game of Thrones episodes that I had missed while I was away.

Today I felt up for blogging again and I looked through some of the many photos I took. I chose this one of a flock of ducks near the mill stream that runs through the university campus. The mill stream is one of the prettiest areas of the campus, and on warm sunny days, people can be seen lounging on the lawn or sitting in the chairs that they have thoughtfully positioned around and even in the water.

Not only people, but also ducks, sit there. These are very ordinary ducks; you see them practically everywhere there is water in the United States, but they remind me of all the nice things about childhood and summers gone by.  I think this picture shows a mother duck with a group of almost-grown-up ducklings. They are no longer the cute little fuzzballs memorialized in Robert McCloskey’s classic children’s book, but are still in need of some guidance and companionship. Kind of like the newly arrived college freshmen.