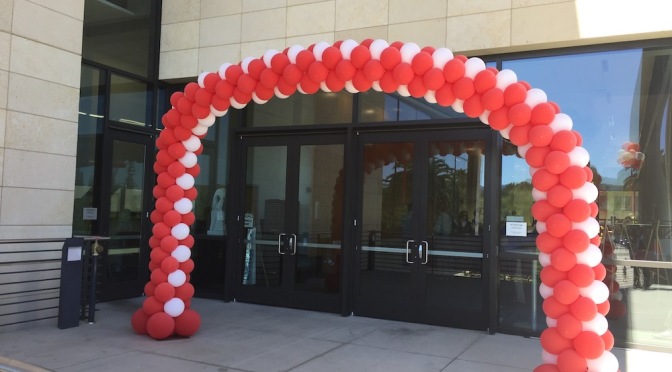 The last time I lived in the SF Bay area, I was a PhD student at Stanford University. I graduated from the Neurosciences Program, an interdisciplinary program for studying the brain that includes faculty from both the School of Humanities and Sciences and the School of Medicine. Even back then, in the early 1990s, brain science seemed to me to be the field of the future, an exciting time full of promise to understand both the world and ourselves. I thought, rightly, that you could spend an entire career, an entire lifetime, studying the brain, and never get bored or tired of it. The tagline for this blog, The Brain–Is Wider Than The Sky, is taken from Emily Dickinson’s poem with that first line.

When I got a notice in the mail about Stanford’s Medical Alumni Day, I wasn’t sure how I would feel about going back. I have followed a less traditional career path than most of my classmates. As PhD students, we were training for careers running our own labs at major research universities. Whereas I have worked in the biotech industry for a number of years, then as a project and grants manager at the Whitehead Institute in Cambridge MA, and then at two different educational non-profits. I’m still working part-time at one of those non-profits while also blogging and writing about science fact and fiction.

I worked on the 2nd Floor of the Sherman Fairchild Building, in the Department of Neurobiology. Back then, that building was surrounded mostly by grass. Nowadays with all the new campus construction, I can barely find where it is without a map, but the entrance doors still look happily the same, next to the elevator with posters advertising seminars and events all over the windows. I swear I’ve been to those same journal clubs!

Two of the “new” (ish) buildings on campus are called the James H. Clark Center and the Li Ka Shing Center, which is where the alumni conference was held. My PhD advisor, Dr. Carla Shatz, has moved up in the world (and also out of the Fairchild Building). She is now the Director of Bio-X, the interdisciplinary research institute in the Clark Center. 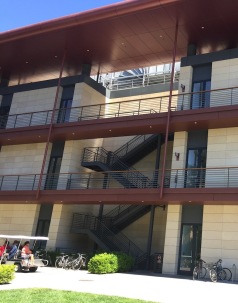 The last door of this tour, is part of my series of Silicon Valley geeky hotspots (which also includes the door of the HP Garage, where an iconic Silicon Valley company got its start). If you go in this door, to the old Stanford University Medical Center Complex, up three floors and turn right, you will get to the lab of Stanley Cohen, one of the scientific founders of Genentech, arguably the first biotech company (read more in The Birth of Biotechnology, by Eugene Russo). This lab is where Cohen grew the first recombinant plasmids, which could then be introduced into bacteria to produce large amounts of cloned DNA.

As is often the case with modern doors, these doors aren’t all that architecturally interesting themselves. In fact, all of them are basic brown rectangles framing glass, some with yellow and black safety stickers. The doors are just transparent passageways to get to the more interesting stuff that is behind and around them.

Thursday Doors is a weekly feature, created by Norm 2.0, allowing door lovers to come together to admire and share their favorite door photos from around the world. Feel free to visit and join in!