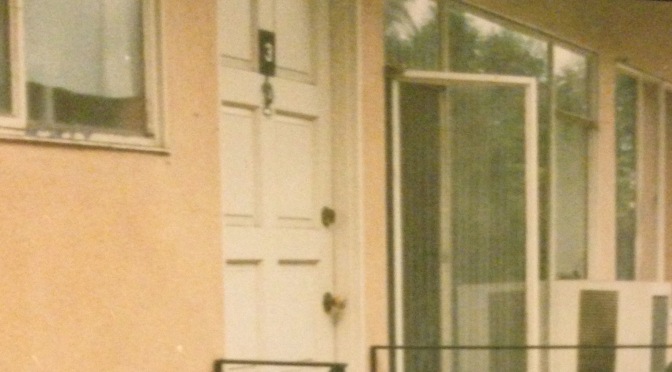 I guess it’s a thing now: in my universe, Thursday Doors happens on Friday. You know, maybe I could learn to use the handy dandy Word Press post scheduling function . . . or not. Maybe next week.

Anyway, in honor of Norm 2.0, who hosts Thursday Doors, this Friday’s post is about the Norma (and its doors). “The Norma,” built in 1954, was the name of an apartment complex on Madison Avenue. Madison Avenue in Pasadena, that is. I lived there when I was a postdoc at Caltech in the mid-1990s. As you’ll note, the building was pink back then.

I moved into this apartment after a long-term relationship ended. It was the first and only time that I lived by myself with no other humans, just a cat. (I met my now-husband a year or so after this picture was taken, and we moved together to Brooklyn New York after we were first married).

My apartment, a 1-bedroom, had one door to the outside: the one in the picture. It surprises me now, after many years living on the east coast of the US, that there is no screen or storm door on this door, but hey, this was Southern California. My little cat, Zooey, scratched at it to be let out and she made a pretty awful mess of the rug on the other side. She was popular in the complex, though. The neighbors knew her. She sometimes met them in the carport and meowed at them.

Since moving back to CA last year, I haven’t yet been down south to see what’s happened to my old haunts. But these days you don’t have to leave your house to do research like this: we have Google maps! Apparently the building has been repainted and is tan now.

Also, I believe the name used to be written on this side of the facade, facing the street. (My apartment door, as shown in the picture above, would be on the right side of the building, around the corner, in this view). The curlicued white letters have been removed and an awning has been added. Otherwise it’s nice to see that the old Norma has gotten a facelift!

16 thoughts on “Thursday Doors on Friday: The Norma”