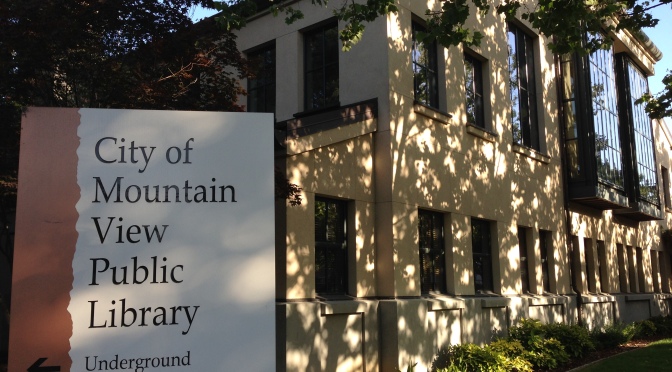 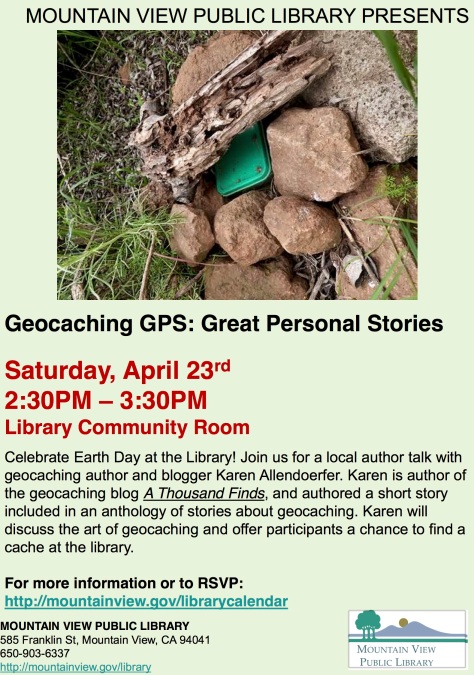 Earlier in the year I got an invitation, at my author address, from a librarian at the Mountain View Public Library. She asked to schedule a public reading of my story from Geocaching GPS at the library.

I love libraries, or at least the word “library” brings back cozy, happy memories. My best friend from high school is a librarian by profession.

But I have to admit, sometimes that library love is more theoretical than actual, because I don’t go there as often as I would like. For example, I no longer visit the library weekly the way I did as a child, to take out books with colorful, durable plastic covers, that looked appealing based on the blurb in their front flaps. 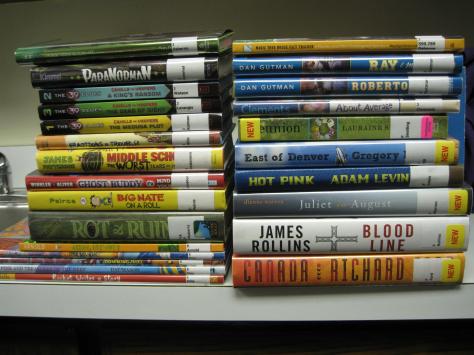 My kids are not as excited about the library as I was either; they prefer the virtual one at their fingertips.

In Belmont, where we used to live, the library was built in 1965, the same year I was, and there was a vocal (and in my opinion somewhat annoying) group of people who wanted to tear it down and build a new one, at considerable expense. We the taxpayers often received polemical literature from this group. The good arguments pointed out that the old building didn’t meet accessibility standards for Americans with disabilities, although it was never clear to me why a renovation plan wasn’t possible for that. Other arguments centered around making the library more modern and 21st century-ish. At the time we moved, none of the pie-in-the-sky plans seemed any closer to being approved, and the old-fashioned, stately, library still stood near the center of town.

The Mountain View library at least looks newer, and bigger. But it still has that nice library “feel” about it.

The Mountain View Library even has a piece of the Berlin Wall: 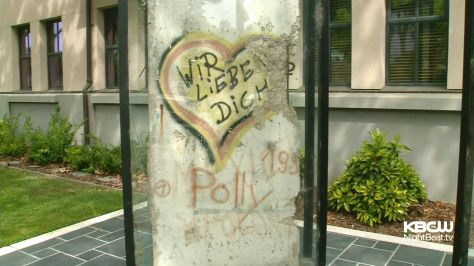 And even here in the heart of Silicon Valley, the librarians take the time to give attention to local issues and authors. When I asked how she found out about me, she said she read the press release I had published in the Los Altos Town Crier soon after I moved here. And she has found a couple of geocaches herself, one by accident.

“Celebrate Earth Day at the Library!” I hope I can do it justice.

5 thoughts on “A Reading in the Public Library”