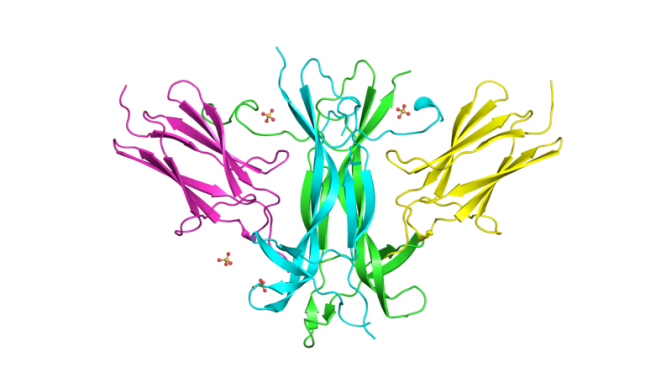 In honor of Brain Awareness Week, I am writing about a topic I studied during my PhD in Neuroscience: growth factors, specifically nerve growth factors, also called “neurotrophins.” These are small proteins that help neurons to survive and make connections with each other. They do so by being made in one cell and binding to a protein called a receptor on the surface of another cell. Once the neurotrophin binds to its receptor, biochemical signals are activated inside the receiving cell that enable it to survive and grow.

The first neurotrophin to be discovered, Nerve Growth Factor (or NGF) was found by Rita Levi-Montalcini and Viktor Hamburger. Levi-Montalcini’s story is a fascinating one of great courage: she was prohibited from working in academia during World War II because she was Jewish, and she did seminal experiments alone in her home, using fertilized eggs she obtained from local farmers. After the war, she was invited to work with Hamburger in St. Louis, where she did the work that won her the 1986 Nobel Prize in Physiology or Medicine (shared with biochemist Stanley Cohen). Her autobiography, In Praise of Imperfection, is a riveting story.

When I started my PhD, I started out looking for interactions of NGF with its receptor during early brain development in the visual system. I didn’t have much luck taking that work beyond showing that a receptor for NGF was present during the time of development I was interested in, but midway through my PhD, some new related molecules (BDNF, NT3, and NT4/5) and receptors (trkA, trkB, trkC) were all discovered. This was an entire new family of neurotrophins and receptors–it was an exciting time, scientifically. I ended up changing the focus of my research to a related neurotrophin, BDNF (for Brain-Derived Neurotrophic Factor) and its receptor, called trkB. These were very early days in the field, and my thesis ended up showing how different forms of the BDNF receptor, trkB, changed over time during development.

Nowadays, BDNF has been shown to have all sorts of fascinating and important functions. These are too many to go into here, but one that has stayed with me and that seems very relevant for our fast-paced blogging world is the role of BDNF in making your brain work better after exercise.  We’ve all heard about endorphins. I studied those in graduate school too, but I always secretly suspected that there was something wrong with my personal endorphin signaling. For example, I’ve never gotten runners’ high, and in spite of a number of abortive attempts to get “addicted” to running or other vigorous exercise, that has never happened to me. In fact, vigorous exercise tends to make me feel crappy, not happy.

But, moderate exercise like walking does seem to benefit me by making me feel better and my mind clearer. According to scientists, that’s because of up-regulation of BDNF in the brain (more BDNF being produced) by exercise, even by forms of exercise as mild as a 20-minute walk.

Scientists also see promise for using BDNF in treatment of neurodegenerative diseases and recovery of function after traumatic brain injury. This article from Stanford’s HOPES (Huntington’s outreach) project  explains the process in more detail, including some drugs being tested that can induce BDNF in the brain in pill form.

This has become a huge field, and I hope that you will turn to the primary sources to learn more.

“How Exercise Beefs up the Brain,” by Kelly Servick, Science, October 10 2013