This weekend we drove to Poultney, VT, in the rain, to drop off our teenage daughter at German Camp. On the way we found a few geocaches.

My husband was born in Germany and is a native German speaker. I lived in Berlin for 8 months as part of a gap year between high school and college, studied the German language at Princeton, and worked in a medical lab one summer in Essen. Nonetheless, our efforts to raise our kids bilingual in New England have not been very successful, at least not yet. There aren’t all that many Germans here. Or at least those that are here are well assimilated and speak excellent English. That was my problem too, even in Germany, especially when I was starting out: their English was so much better than my German that everyone tended to just switch to English to avoid the struggle.

That’s not going to happen here at the MMLA. Students take a “language pledge” to only speak the target language for the entire 4 weeks. Their roommate speaks German, they speak German during meals and while playing soccer and board games. They watch German movies and put on German performance art. Once a week they are allowed to use their phones and speak English to their parents and friends. But we won’t even have to let her do that. And the Academy is pretty isolated. Vermont is beautiful and it’s easy to understand where the name comes from. But there aren’t many opportunities for socializing outside of your group on campus.

“You know,” our daughter said as we pulled into Poultney and followed the signs to Green Mountain College, “We could still turn the car around and go back to Boston.”

The sun came out, briefly, and signs directed us to check-in. Kids played soccer on the lawn. She got an ID, a T-shirt, and a key to the dorm. We went to a parent info session, where they discussed a concern that our daughter had been articulating on the way up. She had said, in consternation, “I can be funny in English. But I can’t be funny in German!” We were told that at first, when the students take the language pledge, the campus gets really quiet. The kids feel like they lose their personalities. But over the course of the month, they build them back up again in the new language. And the campus again comes alive with chatter and laughter.

This is the first time our daughter has been to a sleep-away camp. It wasn’t really a thing when my husband was growing up in Germany, and it wasn’t part of my childhood experience in Western NY, either. We planned this camp back in the fall, before we ever thought we might be moving. But that’s what we’ll be doing when she gets back. So, it was weird driving home without her.

Our 12-yo son sat alone in the back seat, quietly playing on his iPad or trying to sleep. He didn’t want to get out and try to find any geocaches. I did, though; my husband and I got into kind of a rhythm, where he would stop the car at the guard rail and I would jump out, find the container, and sign the log. It was a series of caches, mostly pill bottles covered with camouflage tape, and one small lock-and-lock containing a cute travel bug. We can’t identify him, but he looks Pixar-ish.

The last caches on our list were a travel bug hotel and a regular cache near “Kissing Bridge.” That is the name of a ski resort in New York state, near where I grew up, but it is also apparently the name of a covered bridge in Vermont. And the TB hotel has a really cute design that I won’t divulge here. A quick kiss on the bridge after the cache find, and we were on our way back to Boston. 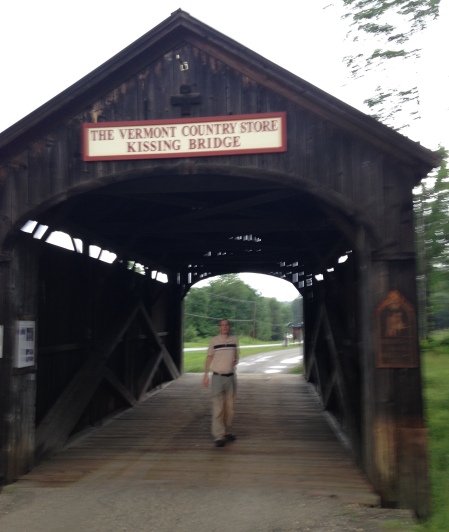 For the most part, I won’t miss New England weather when we move to California. Today I could have done without the rain getting my sneakers wet, the humidity, the mud, and the mosquitoes around some of the caches. But the sunset over the Green Mountains really made the clouds look beautiful. I’ll miss this. 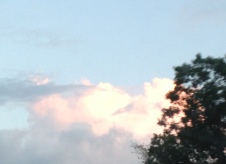 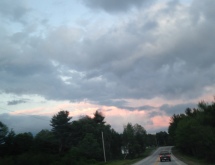 6 thoughts on “Germans in Vermont”