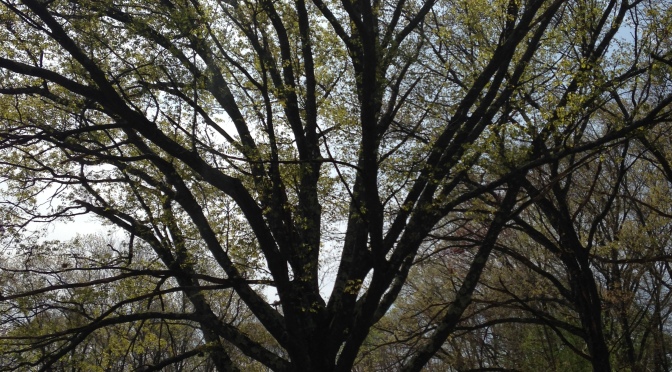 Geocachers in my area are likely, at one time or another, to end up in an institution. No, it’s not because geocaching drives them crazy (although you never know). It’s because of where the geocaches are hidden.

For example, there are a few caches on or near the grounds of McLean Hospital, a mental hospital which at different times was home to troubled artists including Sylvia Plath, Robert Lowell, and Anne Sexton. We spent more than one long afternoon looking for a cache there called “Cache, Interrupted” (whose name evokes the mental health memoir, Girl, Interrupted). It has since been archived. No longer the fearsome setting described in The Bell Jar, McLean Hospital has become a fully modern clinical care and research facility.

More recently my husband and I decided to take a walk to another cache in a meadow, this one called “Unmarked.” It is a little multicache in a cemetery. Someone had planted daffodils at one of the memorials, but most of the graves were unidentified.

The sign said that this cemetery was for people who had lived at the Fernald Center. I had driven by the Fernald Center a number of times, but never known what it was. It turns out that the Fernald Center is another institution with a more troubled history. It was founded as a home for the “feeble-minded” and Walter Fernald, the superintendent, was a proponent of eugenics. According to wikipedia, in the mid-20th century, some of its residents were subjected to sterilization and radiation experiments. It reformed its practices in the late 20th century, and it closed for good only last year, in November 2014.

The placer of this cache asked us to remember the people who lived there, and those who worked there and cared for them. Their stories should not be forgotten.

2 thoughts on “A Cache with a Story”