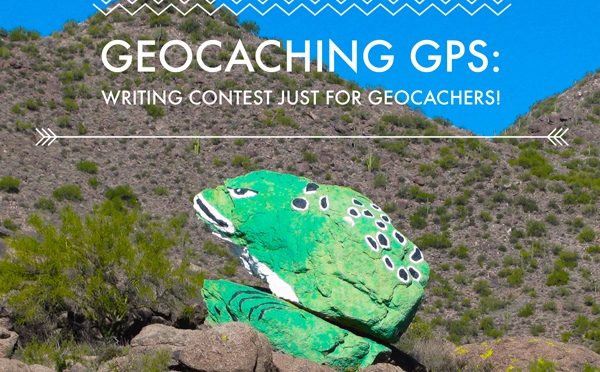 Since November 2012, when I wrote the first draft of my novel, Hallie’s Cache, for NaNoWriMo, I’ve been interested in writing about geocaching. My husband, who has over 10,000 geocache finds, is also better at logging his finds on the official site, whereas I, with <10% of his total finds, always seem to have a significant backlog.

I’d like to think that’s because I want to write more about each cache find, as I find it. I want each cache to have a story. But I can’t write a story–good or otherwise–about finding 20 or 30 caches in a single day. I just get overwhelmed. After a day like that, I can’t even remember what I was looking for that morning, let alone last week. So, like a lot of people, sometimes I make a template of 1-2 sentences about my caching goals, or a little summary of where we went and what we did, and then I just copy and paste it into the logs for all the caches I found that day. It makes logging easier.

Easier, yes, but more fun, no.

So, to see what others do, I’ve started reading fiction based on geocaching. It’s still a small genre, small enough that First to Find has not yet been totally overused as a book title. Morgan C. Talbot’s “Caching Out” series is a fun set of cozy mysteries based on geocaching. I read the first volume in the series with my husband in the evenings. I found the descriptions of geocaching to be very accurate. Her caching names are great–just as, if not more, inventive than those belonging to people I’ve met caching.  The characters in this series are also well-drawn and memorable: two women in a not wholly unlikely friendship, different enough from each other to be interesting, not so different that the reader can’t identify with them. And, in the course of the novel, she explains how geocaching works very well, without talking down to or boring more experienced cachers.

We also found another mystery paperback in a geocache recently: To Cache a Predator by Michelle Weidenbenner. I admit that I have not read this one yet, and my husband took it on a plane trip to California, where he’s planning to leave it in another cache after he’s finished reading it. It’s interesting to me, though, that the author wrote this one during 2011’s NaNoWriMo. I’m not the only one who does this when faced with a blank screen to fill with 50,000 words.

It was actually on Morgan C Talbot’s Facebook page–which I liked a couple of years ago–that I found out about the geocaching story contest.  The contest asked for a personal story related to geocaching, about romance, adventure, or connection. It had to be 1000 words or less, and it had to be true.

There were all of 2 days left before the deadline, and I was scheduled to go to a training for teaching OWL the day the stories were due. I didn’t think I was going to be able to make it. But I thought it was worth a try, and I started writing that day, worked on it for a couple hours, thinking of what to write about. It wasn’t that hard to think of an idea. We’d been caching in Hawai’i last summer, and found a diving geocache called “Bob.” I found it with my husband, and we’d been bickering a bit before we found it. But the afternoon had, in fact, had a little something of everything that the editor asked for: romance (two lovers in an exotic locale), connection (husband and wife bickering but reconnecting in the process of finding the cache), and adventure (it’s diving and it’s in Hawai’i).

But I was only about 2/3 done when I went to the training, and I had also arrived there late due to some teenage drama–all resolved, but still. After the evening session of training was over, we trainees went back to our rooms and settled in for the night. I ended up having a surprisingly passionate and somewhat prickly conversation with my assigned roommate, about music. I needed a break and I think she did too. So, I took out my laptop, and between 10:30 pm and midnight, finished the last third of the geocaching story. It seemed to end a bit abruptly, but I also know that I can be wordy at times without meaning to, and that I’m not always the best judge of when to stop writing. Regardless, it was exactly 1,000 words, and only a few minutes before midnight on deadline day.  I hit send and went to sleep.

It was more than another week before I found out that my story had been accepted. During that time I convinced myself that it was okay if it didn’t happen. I would still read the book even if my story wasn’t in it. Maybe there had been too much bickering at the beginning. Maybe it *had* ended too abruptly. Maybe my husband didn’t want to be in the story at all (even if he said he did). Maybe the title was dumb. Maybe she didn’t believe there really was a geocache in Hawai’i named Bob. But then I got the acceptance email. The book looks great! It will be launched at Geowoodstock, on May 23, 2015. I, the slow logger of caches, am now a published author! I can’t wait to read all the other stories too!

7 thoughts on “Geocaching GPS: My First Publication That Isn’t a Scientific Paper”